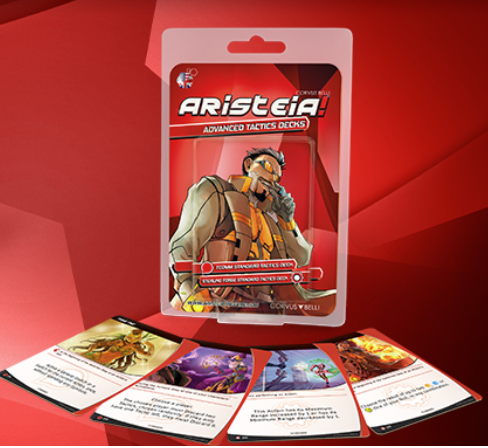 Today I am going to go through the two new tactical decks for Aristeia!

If you aren’t sure what these are, let me explain. A normal game involves deck construction of 10 ‘base’ cards followed by 2 cards per Aristo, for a total deck of 18.

These two tactical decks replace the 10 core cards. Pick one of the two (well, now 3) base decks, add your 8 cards from your Aristos, and get on with trying to win in the Hexadome.

Each deck focuses on a different aspect of the game. One set (TCOMM) focuses on control and deck manipulation; the second deck (Stirling Forge) relies on dice manipulation.

Like the base decks, there are duplicates of some of the cards. Well, kind of. Several have the same artwork, but different names. Also some have slightly different timings on them, which is very easy to miss if you aren’t paying attention.

The first six cards duplicate the benefits from Dodge, Take Aim and Focus from the main decks. Note that each pair of cards are not total duplicates, one of each pair has a red background, and allows you to add an orange when making any roll. The second one allows you to add the dice when not making an attack roll (with a blue / purple background).

This means, of course, that these cards are slightly worse than their main deck equivalents. They all have the main secondary ability which is to allow you to deck-cycle very quickly indeed. Combined with a mulligan, the odds of you getting to a crucial card you want increases a lot.

Is this important? Probably. Maybe. If you are planning on scoring and doing early frags you might find that you are drawing a lot of cards anyway. Also this may have less of an effect later on in the game when you are running low on cards anyway. However, if you have a card combo that you really want to pull off early they can help you live the dream.

What sort of combos? Off the top of my head, I’m thinking of using Gaia’s Epirogenesis to lob someone like Shona Carano and Riposte / whirlwind in their deployment zone early in the game. Another could be using Laxmee’s 4-Kaleidoscope followed by Final Bosses Crystal Clear.

Whilst these all sound great, and they are, remember that this deck has no No! card, and so it lacks the denial or the double No! counter to make sure these combos work.

That said, this card can help with the No! problem to ensure you can pull off those combos. It is kind of like a mini-no, as it lets you stop a horrible card being used early in the game, knowing you may well see it later on. This card is potentially as good as a No! if your opponent has no deck searching or card draw of their own as they may be unable to get to the bottom of their deck by the end of the game.

Yes – there is a reason that Taowu is on this card. This is a pretty grim card, especially if you are able to return other cards of theirs to the deck with Broken Firewall first. This is a card that will probably get denied by your opponent – which is fine, as that increases the chances of your other cards being pulled off.

You want Wild Bill to use Twin Pistols and guarantee his switch to shoot again, then use Ace of Clubs to shoot again? You got it. You want Mushashi to guarantee Kan No Sen more than once in a turn? Sure, why not? Other powerful (and potentially less obvious ideas) are ones like using Bixie’s Celestial Wind to get another action point. This is a hard switch to hit, and as Bixie has the lowest action point total in the game it is huge for her.

I like this card a lot. Plenty of characters have a couple of cards that I would consider almost must-takes, with a third that makes it a really hard choice, and now you can have that one as well.

Notable ones I can think of (but to be honest, there are many of them) are Kozmo’s cards, as I don’t think she has a bad one in her set. Hannibal also likes this card, as he can give out free actions, allow you to re-shuffle your discard pile into your deck and re-roll dice at the same time – with the benefit that the re-roll card automatically goes back into your deck again.

So is this deck good? Yes it is very good. It has the potential for complete card dominance over your opponent. You have to play it carefully though, and make sure you use the cards well. It is able to add less dice than the core deck, and it lacks a No! so you might find your favorite card is denied at the wrong time.

Despite the deck name sounding like a James Bond character, this deck is a powerful set of cards that relies on dice manipulation.

Like the TCOMM deck, these cards are split into helping with combat rolls and general rolls, and so are slightly worse than their core-deck counterparts. That said, a dice re roll is very strong, and allows you to flatten out those annoying dice spikes. You get one re-roll anyway in the core deck, and only half of these cards can help with non-combat dice rolls – so there is a definite choice to be made.

That said, if you have a large dice pool with a re-roll, it can swing the game, and a quick kill or a evade roll can win (or lose) a game.

Lots of my earlier blog articles had me ranting about how much I loved Holographic Sight – and this is a mini one. Well, kind of, as it also reduces minimum ranges as well. Wild Bill and Dart will love this card, as it prevents people from engaging them and being immediately safe. Major Lunah likes it too, as a minimum range of 2 rather than 3 is a big deal. Other notable beneficiaries of this card include Shona Carano, whose Broadsword suddenly get a range of 1-2, or 2-3, which is a massive improvement from her quirky range of 2-2.

See my rant further up in the TCOMM section about how powerful this card is. Except this one is better as it has a picture of Senor Massacre throwing chocolates at a surprised Maximus.

This card can guarantee 4 damage if you are rolling two orange die, or four shields if you are rolling two blue. Note it cannot allow you to mess with red dice – but you can re-roll that one with other cards. The reliability of damage and defense output with this is truly terrifying. Hey, use it with Shona Carano (and add an orange card) to guarantee 6 damage before she rolls a red die! Fun! This card is begging for a No! – but then many cards are at this point.

Depending on what cards you have in your deck this could be a near-complete deck refresh, allowing you to throw cards at dice rolls with impunity. Late game when your opponent has run low on cards it can skew the dice odds hugely in your favour.

Is it a strong deck? Oh yes – but you have no card draw and card selection tricks – so you had better reply on scoring and frags to keep your card draw up. This deck rewards aggressive and fast play – and of course – lots of violence.

So, is the main deck still worth it? I think so. It can add dice more reliably to any roll, it allows some card draw and selection, and of course has a No! It seems to fir squarely in the middle of two extremes.

But there are really two winners out of this…